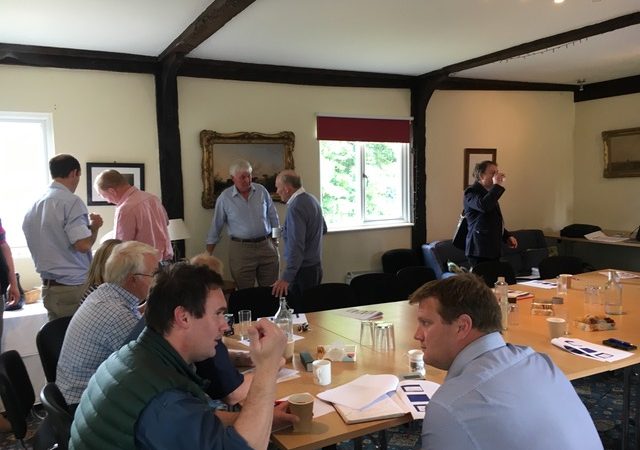 At the time of our 2018 summer meeting JVFG member businesses were feeling positive about their crops’ potential but still glad of several key pointers from the group discussion to help their management decision-making particularly with regard to costs of establishment.

Businesses with spring in their step

Decisions are drawn from the JVFG benchmarked data. This time the in depth-analysis was of the costs of primary and secondary cultivations for crops of 2018. Once again, JVFG consultant Jamie Gwatkin reported that the more primary cultivations are done in the autumn (rather than in spring) the better. He pointed out the price penalty of spring work, “Spring cultivations always have lower work rate and increase costs by £20-25/hectare. But we can also see that autumn work is not without costs too: depreciation. You need to factor in that if you do all your work in the autumn and then leave equipment parked in the shed and doing nothing else then the depreciation can add up to £20/hectare to those autumn costs.” 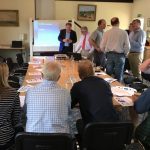 JVFG members use the summer meeting break to absorb benchmarked costs of establishment.

Understanding the relationship between costs per hectare and costs per tonne was another subject for debate. While eight of eleven business in the group are showing further falls in their costs of establishment (primary and secondary cultivations plus drilling and rolling) it was debated as to where and how further gains could be made. In this era of minimal tillage, it was discussed how min till is most useful in arid conditions, in order to conserve soil moisture, or on poorer land where lower yields necessitate reducing costs. But is it possible to cut back too hard on cultivations on better land? Chris Middleditch from R and R Farms in Suffolk was interested to see that while his business has some of the highest establishment costs per hectare, his techniques help to deliver the lowest costs of production per tonne across the whole group.

While some JVFG members are continuing to set themselves targets of how to reduce costs still further by choice of machinery and operator technique others are looking at other factors. Pelham Farming has seen that, after several years of falling costs, now their costs of establishment have plateaued out. “So now we are putting more effort into getting the land into the best possible shape to get a good seedbed and to reduce costs of production that way.”, explained Edward Hitchcock.

Several member businesses have been measuring the costs of establishing margins for Countryside Stewardship Schemes. R and R Farms of Suffolk revealed the costs of ploughing, cultivating and drilling field edges, corners and triangles for one environmental scheme. The consensus from the group discussion was that businesses firstly need to be careful in agreements where landlord wants such establishment to part of the contract and secondly to be aware of the true costs of man and machine and not to be shy about charging a realistic rate for the work: this can be as much as £60/hour for man and machine.

The JVFG benchmarked analysis is fuelled by the data inputted from each member business.  As well as streamlining work in field, the members want to streamline the collection of data so that tasks, the tools and the time taken can be digitally captured quickly on the job and uploaded to the farm’s record keeping and ready for transfer easily into the JVFG data base.

Thoughts turn to getting the harvest home

JVFG members shared their preparations for harvest. Top priority are their pre-harvest systematic checks of all equipment and also the training of the workforce for an efficient and safe harvest.  Jamie Gwatkin provided a detailed and sharp combine harvester analysis.  The findings from his investigation of the costs and ramifications of different combine plans are already steering member’s decision of which and how many combines they choose to buy or hire and maintain whether themselves or with service agreements.

All the facts and discussion of the JVFG summer meeting were observed and enjoyed by James Hopkinson who manages a joint venture in Angus, Scotland.  JVFG Chairman Tim Merry remarked, “It’s a really positive step to have this interest from joint venture farmers in Scotland.”