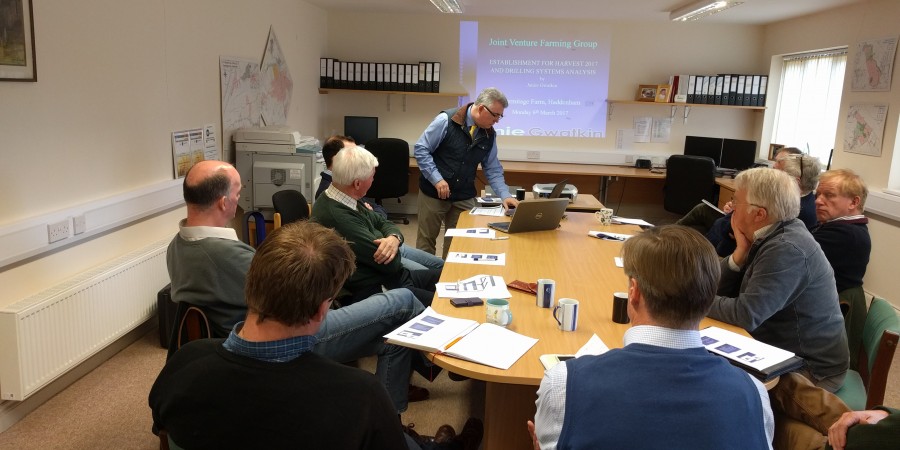 The only way up is down: latest JVFG benchmarked results

By Susie Emmett On March 28, 2017 · Add Comment · In News
There has been a steady downward progression in costs for each farm involved in JVFG benchmarking.  That was the news headline for the member JVFG farms at their recent spring meeting. This time the host farm was AG Wright and Son (Farms) Ltd, Haddenham, Cambridgeshire.  Members heard the latest JVFG benchmarked results: the costs of establishment across all JVFG member businesses.

Yes, thanks to autumn 2016 weather conditions being generally dry, higher work rates had a knock-on effect of reducing costs.  However JVFG consultant Jamie Gwatkin, with his usual in-depth analysis, highlighted many more lessons to be noticed in the numbers.
Winter barley and winter oilseed rape seem to be linked. The acreage planted with these crops has dropped. But spring barley area has increased as growers look to lower their financial exposure.

With primary cultivation, it was noticeable that Essex-based Granta Farming, who have a plough-based system, struggle to plough in very dry conditions. This has led them to use a Patriot cultivator with higher work rates and lower running costs.

As regards to secondary cultivation, probably the largest change seen was at Brixworth Farming of Northamptonshire as they move to a direct drilling system. Much higher work rates have been achieved reaching as high as 6.2 hectares an hour. This has led to a secondary cultivation cost of £9.60 per hectare.

When combining primary and secondary cultivation together

With the move to direct drilling, it is noticeable that drilling costs increase. Stoke Farms of Buckinghamshire achieved just over £35 /ha compared to a group average of just under £22/ha with a work rate of 2.26 ha/hr. While the lowest was a cultivator system at Manor Farm, Oxfordshire, with just over £14/ha  as a result of higher work rates of 3.49 ha/hr as compared to an average work rate across the group of 2.84 ha/hr.

Back to best farming practice

JVFG members return to the farming of the season feeling that, yet again, the data has demonstrated large variations in costs. This means there is still scope for improvement.
The full picture of machinery running costs will only become clear when cost per tonne is calculated at next analysis meetings scheduled for early summer and autumn 2017. However, in the meantime, all JVFG members are heartened that for all of them the overall trend is that costs are being pushed downwards.
Tagged with → arable • benchmarking • benchmarking; joint venture; machinery costs; profitable farming; JVFG; articulated tractors; • costs of establishment • crawler v tractor
DMS
This website uses cookies to improve your experience. We'll assume you're ok with this, but you can opt-out if you wish.Accept Read More
Privacy & Cookies Policy
necessary Always Enabled
non-necessary