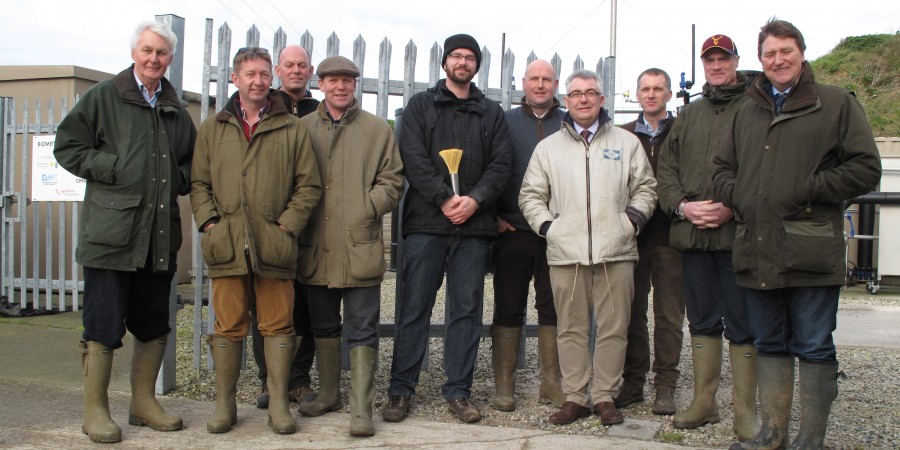 More than half the members of JVFG are making a profit even with wheat prices at £108/tonne. This was the news announced by JVFG consultant Jamie Gwatkin as he revealed the results of crunching and comparing all the data on labour and machinery costs for harvest 2015 recorded and submitted by group members.

Beacon of hope for other farmers

“The fact that over half JVFG members are in profit even with crop returns as low as they are is a beacon of light to UK farmers” says Gwatkin. 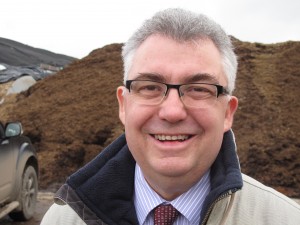 “We’re expecting lots of interest in why and how these businesses are so successful.”

Twice a year JVFG members gather to hear the results of analysis of their business performance. Their winter meeting was – for the first time – held in Dorset, hosted by the consistently high performing business JV Farming, directed by Tim Merry.

The December meeting, preceded by dinner and overnight at a local pub, began in the barn at Bardolf Farm with an examination of the simplified, versatile and low cost toolkit that Tim Merry and his team use to establish their crops. 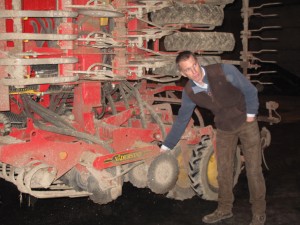 He explained his choice of Fendt tractor, an ex-demo, and his trusted Vaderstad drill in which he had invested in maintenance by renewing all the track rods. Being a JVFG farmer he knows the cost of that: 15 pence per acre. He predicts it will have another five years or 19,000 acres of work from that investment. Next the group had a tour of the Rainbarrow AD plant built by the farming company’s sister business, JV Energen.

Each JVFG member is issued with a bespoke report. The evidence inside their tailormade dossier reveals the results of their decision-making on machinery use as well as the performance of operators and machines per hectare or tonne sold. “It’s clear that there’s still progress being made to drop the costs of establishment ” reported Gwatkin. 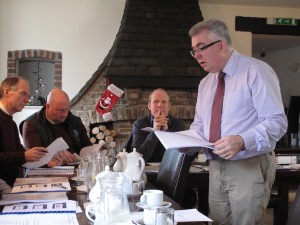 Essex-based Pelham Farming were praised for significantly reducing their costs of establishment by 17% year on year. Edward Hitchcock puts that welcome latest reduction in costs down to the combined influence of falling tractor depreciation, increasing the hours worked by each tractor and investing £3500 in a coulter blocking monitor system.

“The current economic climate is precisely the point at which you need to look at what equipment you’ve got in the shed and decide whether underused kit is a luxury you want to afford to keep or not.”, reminded Gwatkin. He added that overall the cost of drilling has become a lot more level across the group. “There’s less replacement and more maintenance. And you ask me are the harvest costs falling too? No.  And why? Because the biggest cost is depreciation. Therefore managing replacement policy will be critical over the next few years.”

Inevitably there is a small element of competition between JVFG member businesses. It’s fitting perhaps that the trophies awarded each year to the winners are correspondingly small. 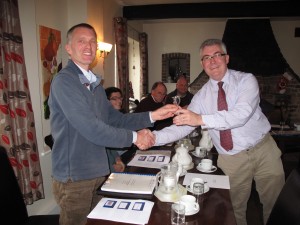 Winding up the highly valued discussion, Jamie Gwatkin remarked on some impressively good news. “Excluding all subsidies, and taking into account a notional rent, our figures show the true commerciality of growing wheat. We can also show which JVFG member businesses are making a profit even in these incredibly tough times.

For those members, and for the others who aspire to their level of efficiency, the challenge ahead remains the same: how to reduce costs while maintaining and even increasing yield and also getting to grips with the yield damaging blackgrass problem that is rife in many of our member’s regions.

“I like to throw the grenade of explosive facts and figures into the room and then stand back to steer the comments and discussion on what each business is going to do with that information” he concluded. “This group is all about helping farm businesses to change their decision-making to improve their cost structure. It is deeply satisfying to see that happen over time.”